Sculpture, ancient form of art, was born together with painting in prehistoric times. Since its very beginnings, it has been intended according to two main aspects: one strictly connected with the pictorial art, that is relief – starting from the more elementary form of graffito to the more complex techniques of high and low relief –, the other one typical and exclusive of the sculptural art, that is the in-the-round creation (statue) of an object, which offers different points of view and that can be contemplated from every side.

The entry for “Monumental” in “A Dictionary of Art and Artists” by Peter and Linda Murray  describes it as:
“The most overworked word in current art history and criticism. It is intended to convey the idea that a particular work of art, or part of such a work, is grand, noble, elevated in idea, simple in conception and execution, without any excess of virtuosity, and having something of the enduring, stable, and timeless nature of great architecture. … It is not a synonym for ‘large’.

In monumental sculpture, dimensions overshadow the usual sizes of statues and works, mainly due to the following:

• in the religious field, to create something divine, eternal, memorable (for example, churches, cathedrals, tombs);

• in the political field, as a reinforcement of the image of power;

• as a personal ambition of the author: a form of egocentricity to show one’s omnipotence in the sculpture field.

It is also used of sculpture that is architectural in function, especially if used to create or form part of a monument of some sort, and therefore capitals and reliefs attached to buildings will be included, even if small in size.

In many cases, monumental sculpture often becomes a landmark, and a historical marker, meant to be observed and held in reverence.

Or it can be taken as a source of inspiration: the monumental statues by Salvador Dalì, up to 7 metres height, capture the observers’ attention and take them in the enchanted world of surrealism.

Among the most renowned is “Woman Aflame”, almost 4 metres high, which combines different important recurrent themes of Dalì: fire and flames, crutches and a female figure with drawers. 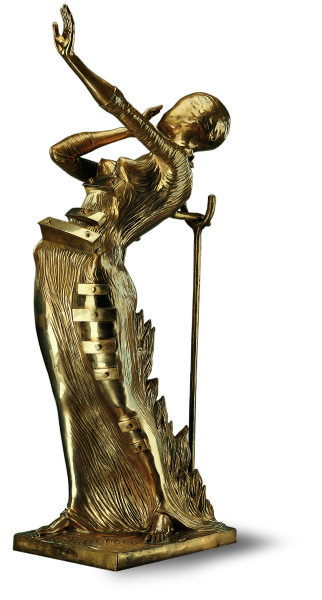 The wide contemporary structures not only put in evidence the greatness of man in this world, but they also invite us to contemplate it through the eyes of the artist.
These large volumes, observable from different points of view, are full of messages and meanings, different for each and any of us. Maybe this is exactly the greatness of art: independent thinking and its variation through vision of forms, colours, sounds.

Among the most famous works, we include Maman, by LOUISE BOURGEOIS 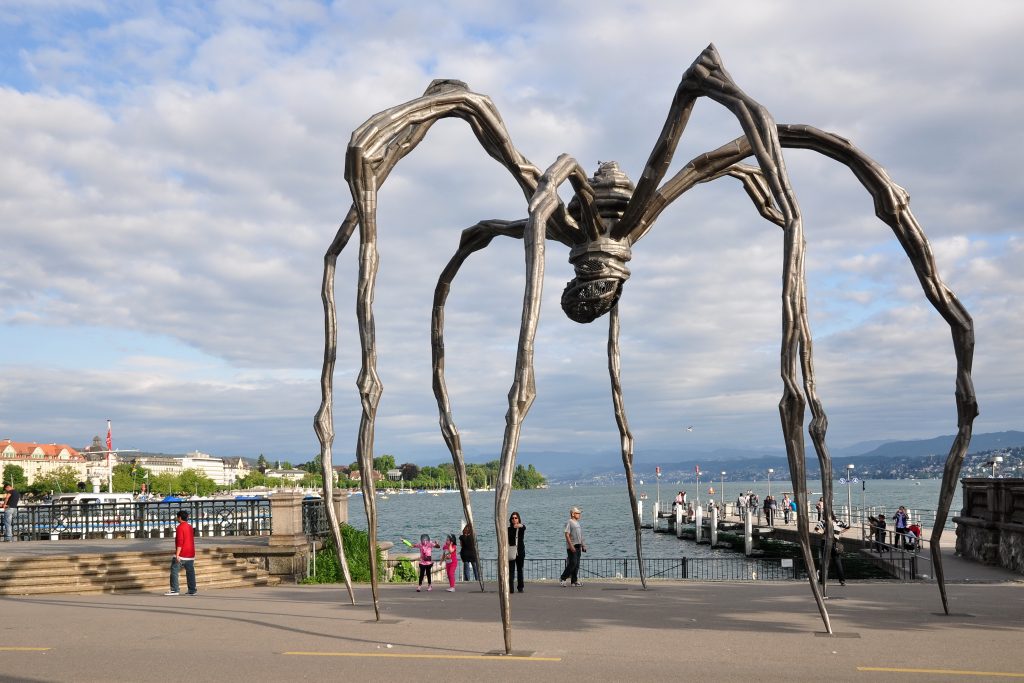 Maman (1999) is a bronze, stainless steel and marble sculpture by the artist Louise Bourgeois.

The sculpture, which depicts a spider, is among the world’s largest, measuring over 30 ft high and over 33 ft wide (927 x 891 x 1024 cm). It includes a sac containing 32 marble eggs and its abdomen and thorax are made of ribbed bronze. 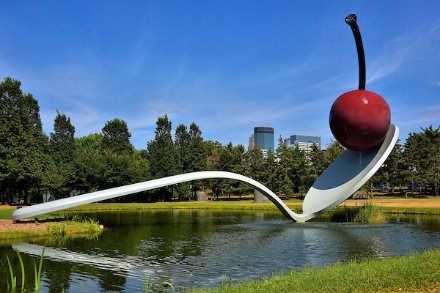 The XX century was the century of Avant-guards and Pop Art. Pop Art represents a means of communication for the popular culture, which utilises everyday objects to express complex and allegorical ideas.

The Swedish-born American painter and sculptor Claes Oldenburg is one of the most important representatives of the Pop Art.

One of his most monumental works is  “Spoonbridge and Cherry” realized in 1988 and commissioned by the Sculpture Garden of Minneapolis in Minnesota.

The installation represents a silver spoon with a red cherry on it, whose stem also acts as a fountain spraying into the bowl of the spoon and off into the pond beneath, adding a sense of order and proportion, thanks to the reflection on the water.

Arcade is the biggest sculpture ever made by Kobe.
“It is in Canada (Blandford, Nova Scotia) on a private land next to the Atlantic Ocean.

There was first a small version of Arcade (18 x 17 x 12 cm). The person who eventually bought the bigger model first saw the small model in Robinsons Gallery in Belgium on an art exhibition where my father also was.

The person was impressed by this small sculpture and asked to my father if he could make an enlargement of that model.

My father asked to the potential buyer: how big do you want me to make the model? The person replied with: Big enough, so the boats can easily see your
sculpture from far away…

So that is how my father started to make his biggest ever sculpture… and it all started because the buyer fell in love with the little model.” 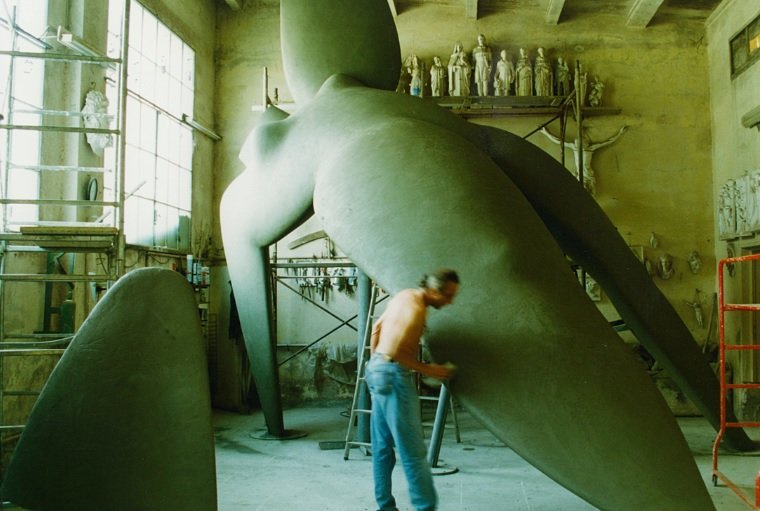 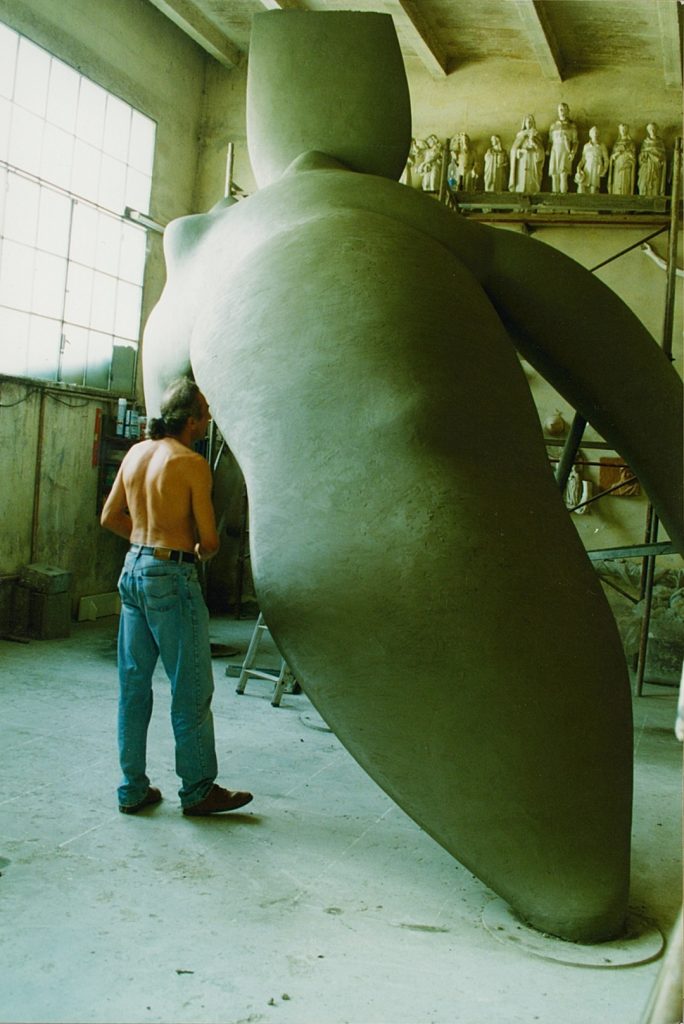 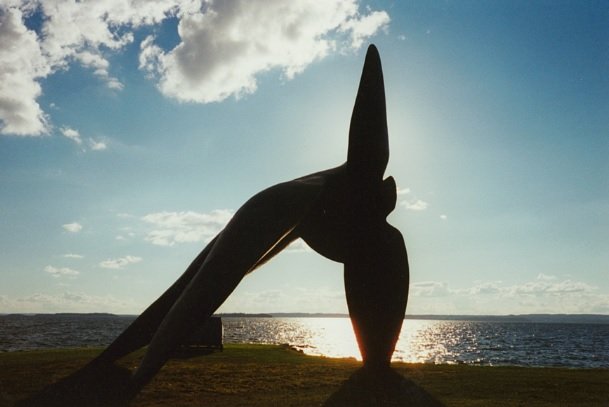 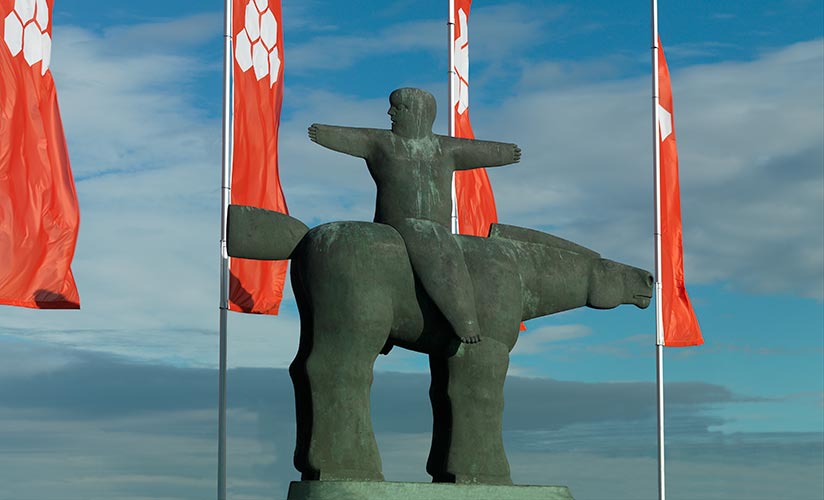 “The Great Captain” masters the technique of bronze casting to perfection and is very skilled in the patination. The sculpture consists of 30 pieces of bronze that were assembled, finished, provided a base and patinated.

Kobe repeatedly used the horse as a theme in his work because, in his
opinion, it is a beautiful, majestic animal that is close to man and
that is sculpturally versatile.

The “Great Captain” is a figurative sculpture with abstract shapes around a tight set of geometric lines.
Kobe repeatedly used the horse as a theme in his work because, in his opinion, it is a beautiful, majestic animal that is close to man and that is sculpturally versatile.

The square, circle, horizontal and vertical lines play a vital role in this sculpture. The horse is a horizontal line from head to tail, like the extended arms of the rider.

The apparent simplicity of this sculpture conceals plenty of complexity.
The first thing you see is the depiction, the recognizable part (the drawing as it were) and then, on closer inspection, you discover the fine and honed model. Kobe intentionally eliminates all anecdotal detail from his work; only the essence remains.

The sculptures of Kobe have a universal character. The sculpture has a certain degree of detachment and seems to want to keep something to itself.

Kobe is constantly looking for beauty, a small feast for eye and mind. His sculptures invite the viewer to touch them, to feel, to caress and cherish them. His works can be described as lyrical, emotional, sensual, ingenious, cheerful, coquettish and powerful.

“The Great Captain” is the favourite sculpture of Fernand Huts (Chairman
of the Group Katoen Natie).

In this book mister Fernand Huts explains why this is his favourite sculpture: “Why did I choose this artwork? First of all, Kobe is a Flemish artist with bags of talent.

I chose this work, because it exudes
dynamism, enthusiasm, pride and elegance.

Furthermore, there is also a certain symbolism, because for many centuries, the horse was fundamental to the prosperity of the corporations in Antwerp!”