Professor McManus (University College of London) was awarded the 2002 Ig Nobel Prize –  the ironic prize dedicated to the most useless researches – in medicine for his study “Scrotal asymmetry in man and ancient sculpture“.

The study ascertained that, in 107 sculptures of the classic period, the left testis resulted to have been carved bigger and lower than the right one. This unusual asymmetry was attributed to the fact that the ancient Greek believed that the left testis was “responsible” for the production of females.
Mathematicians and scientists agree upon the concept that Symmetry and Beauty are closely related.

Every scholar – art historians and philosophers included – agrees that, though recognizing the pleasantness of symmetry and its perfect harmoniousness, it leads to a rigidity that may appear as boring, unattractive and static.

Vice versa, asymmetry – which can be gathered only in relation to symmetry – in a certain way less predictable and chaotic, can enhance beauty, rendering it more intense and exciting.

The first canons of beauty are found already in 450 B.C. when the Greek sculptor Polykleitos, in his treatise “Kanon”, defines beauty “in the proportions, not of the elements, but of the parts, that is to say, of finger to finger, and of all the fingers to the palm and the wrist, and of these to the forearm, and of the forearm to the upper arm, and of all the other parts to each other”, thus linking beauty to symmetry.

Vitruvius (15 B.C.), in his treatise “De Architettura”, adds “… Symmetry arises from proportion, which the Greeks call ἀναλογία (analogy). Proportion is a due adjustment of the size of the different parts to each other and to the whole; on this proper adjustment symmetry depends. Hence no building can be said to be well designed which wants symmetry and proportion.” ln other words, the aspect of a piece will be pleasant due to the harmonic proportion of the parts, based on a sapient calculation of the symmetries.

For many centuries, an example of the perfect proportion of the human body has been represented by the sculpture Doryphoros made by Polykleitos. For the first time, the Greek sculptor imposed a second symmetry axis, thus introducing what will be considered as the chiastic principle (the crossed disposition – from the Greek letter chi – of the limbs which solves the problem of equilibrium as the oppositions are balanced): the work can be seen as a harmony of opposites.

During the realization of the Doryphoros, Polykleitos set up a series of measurements on human bodies to find the ideal ratios and proportions.

At a later time, during the Renaissance, the Vitruvian man will be adopted by Leonardo da Vinci as symbol of the harmonic proportion; the chiastic principle will be rediscovered and resumed by Michelangelo for the realization of his David. 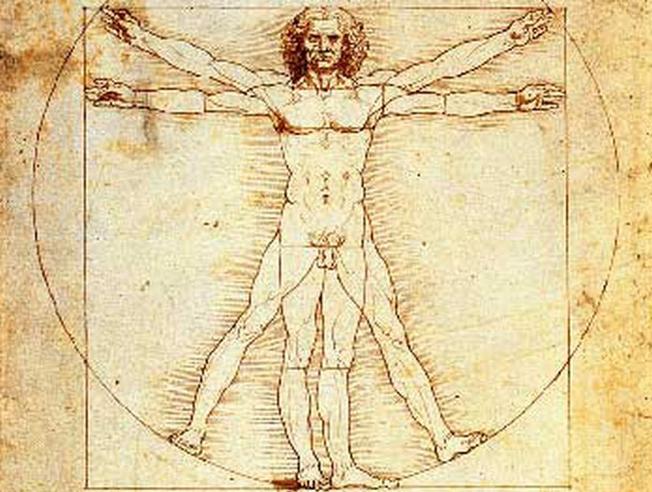 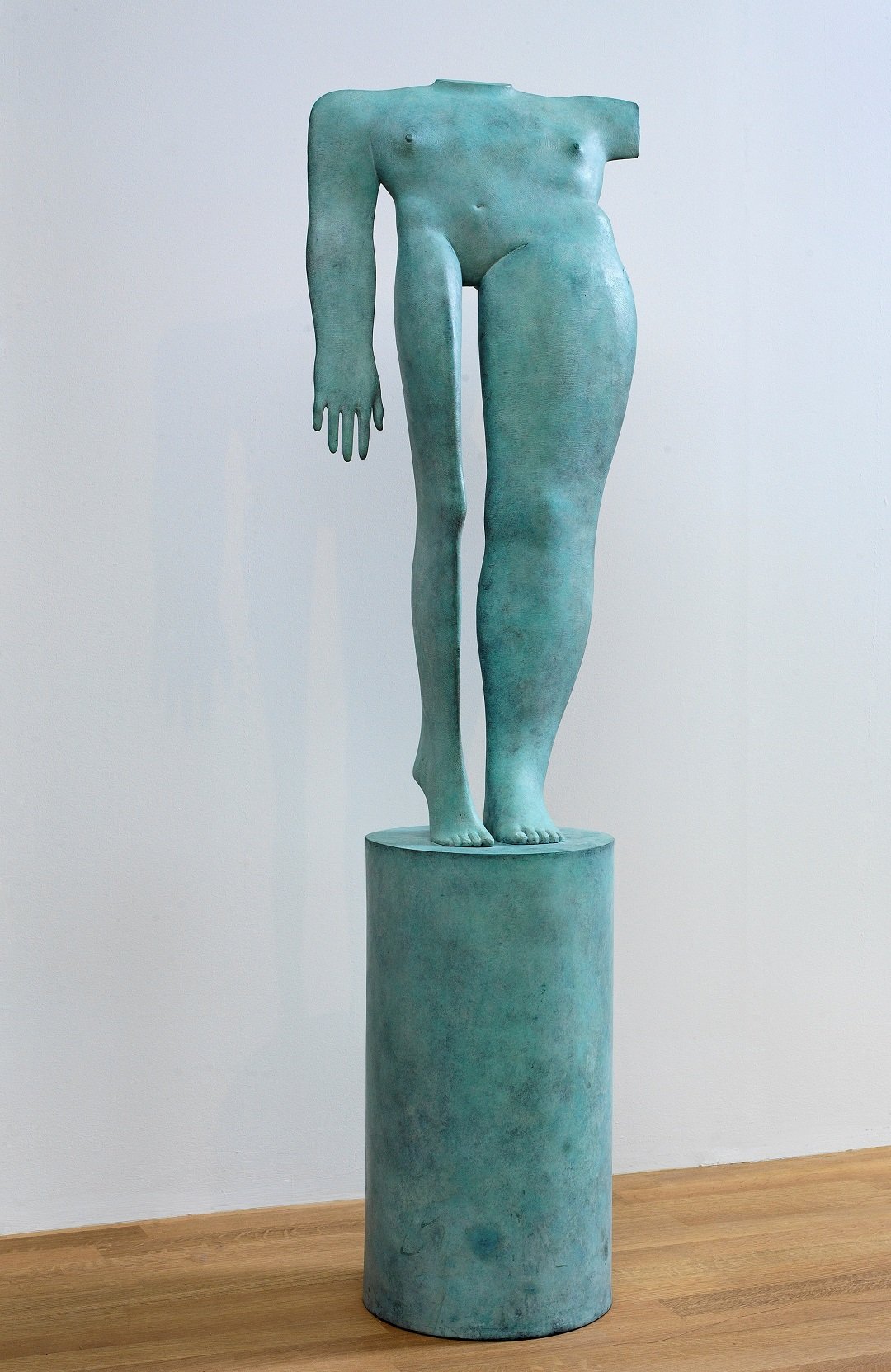 “What catches the eye immediately with this torso is the play of flat and bulky shapes.
Here, Kobe chose the human body as the basic pattern, a fixed notion. From different perspectives, this body looks thin one moment and round and full the next.

Kobe’s ideology – life and history as a dance – is expressed in it. In life, the same events repeat, but always with new participants and ‘costumes’. But the basic pattern does not change. ‘Small Torso’ has been cast in bronze and patinated with copper nitrate for a light green colour”.
(© Loek Dijkman: Het Depot Wageningen) (Fragment, Nummer 10, Voorjaar 2016, p. 97)

The work on page 125 (from the monograph ‘Kobe – Ingenious Simplicity’) is another great example of asymmetry. 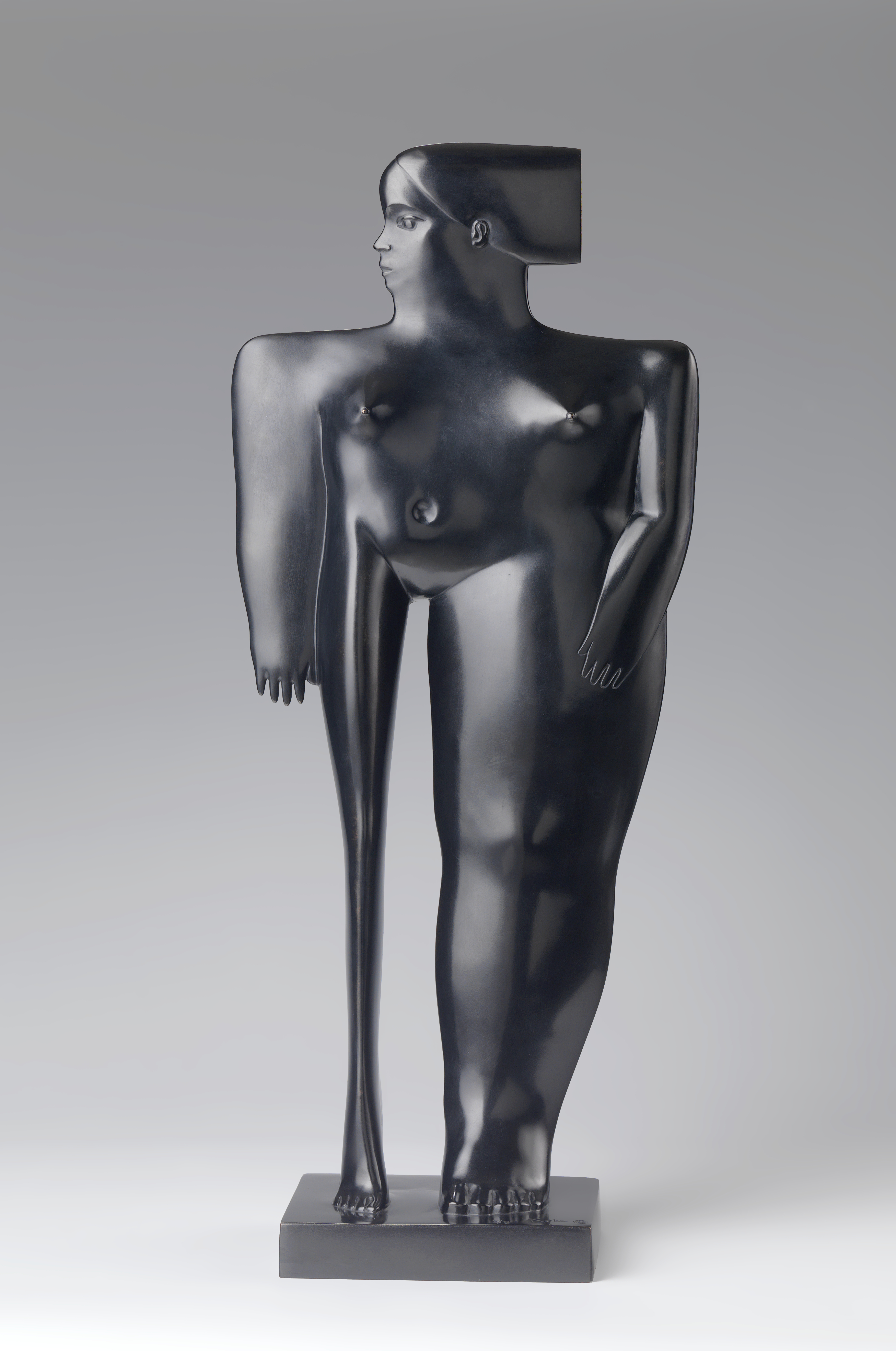 ‘Well? Here I am!’ The title of the work is especially evident from the woman’s gaze. A beautiful, somewhat stoic face and a look to match.

As if she got herself ready to go out. Extremely sparse, subtle coquetry. No more than necessary. Not too rich. Her beauty – Kobe preferred it that way – is natural.

This woman has nothing to hide. The sculpture exudes a quiet confidence. ‘I am here, so what?’ Moreover, there is the play of shapes (limbs) that has become so typical of Kobe: a thin leg and a wide copy, the typical fingers that reinforce the idea and carry you away from reality and the delusion of the day. 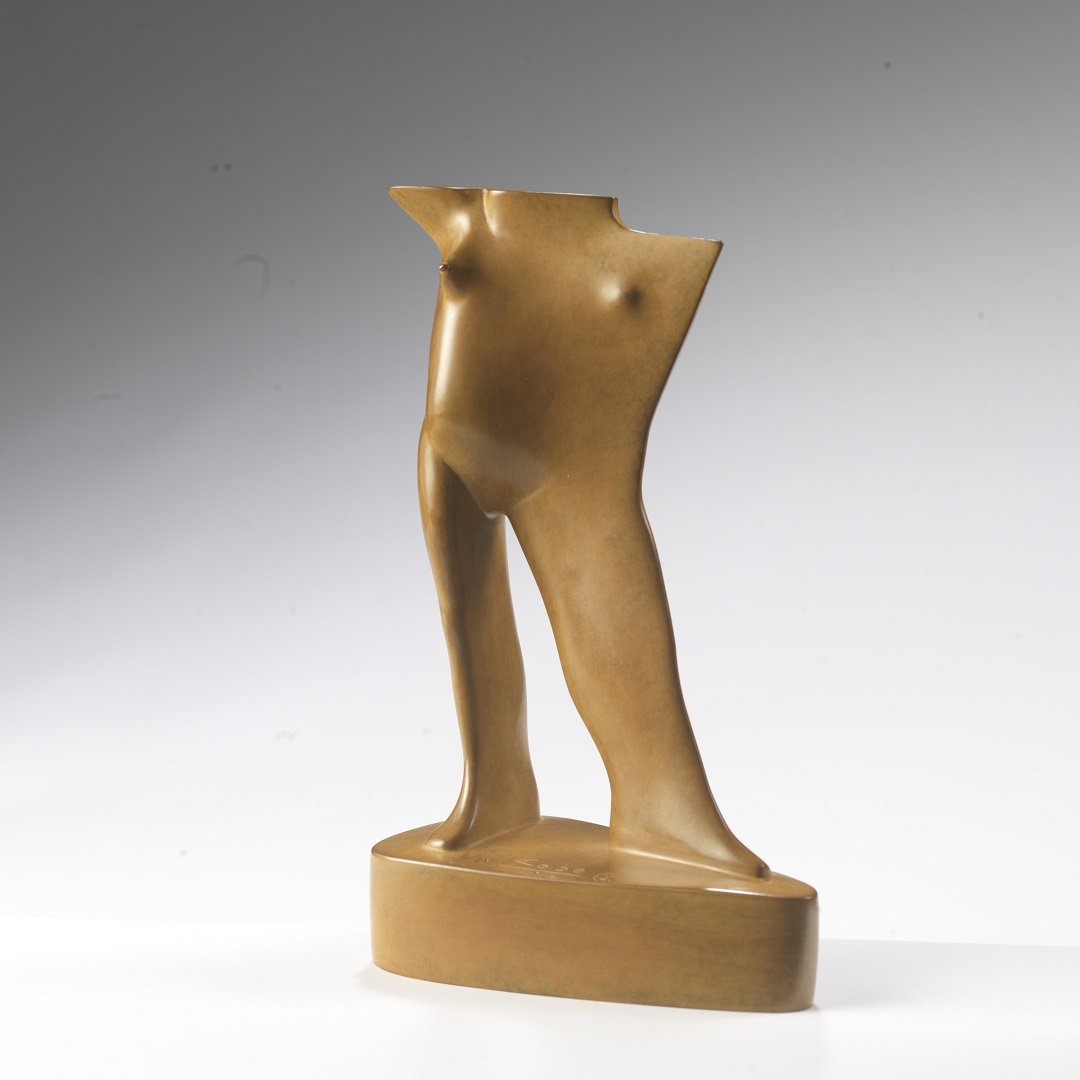 With the work ‘Trots’ (‘Pride’), the artist focuses solely on a certain posture.
He has omitted the woman’s head. The torso alone should shape the expression and feeling. That slight hip turn and the leg turned outwards, the prudent yet confident pose, speak volumes.

I feel pride and at the same time a form of mild indifference, distance, introversion that is so typical of Kobe. You can’t get a handle on the figure.

Not everything is disclosed. The mystery remains unexplored. Kobe illustrates ‘Trots’ (‘pride’) without the big story. No arms this time, and no cute toes to which Kobe usually treats the spectator. No, three physical elements that shape an emotion.
copyright: Johan Debruyne, art critic 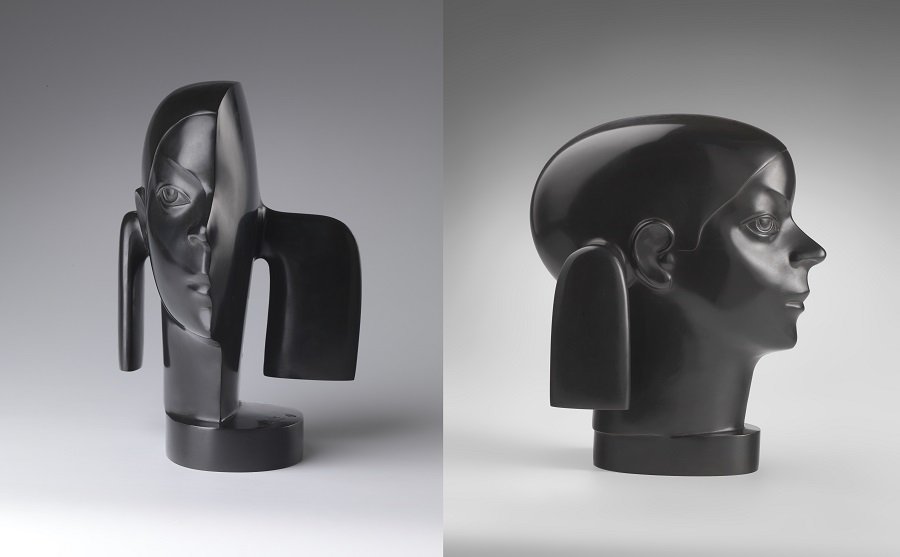 A cheerful and extremely cool sculpture. It refers, in my view, to the simplicity that Kobe knew how to value in women. Ostentatious behaviour would not have gone down well with the artist.

Yet, this sculpture undoubtedly was once an excuse to play with shapes. And he took it to
extremes here. He did it with half a face, two similar and yet completely different shaped tails.

The way the artist masterfully combines geometric planes, lines and lyrical elements into a symbiosis is out of this world! Especially in this area, this sculpture is in a class of its own. A play of shapes becomes horse, while the sculpture exudes force, pride, happiness and
invincibility.
Wonderful.
copyright: Johan Debruyne, art critic

Michelangelo’s marble “Every block of stone has a statue inside it and it is the task of the sculptor to discover it” – Michelangelo  Ogni blocco di pietra ha una statua dentro di sé ed è compito dello scultore scoprirla” – Michelangelo. Michelangelo’s cave still...
Read More
We use cookies on our website to give you the most relevant experience by remembering your preferences and repeat visits. By clicking “Accept”, you consent to the use of ALL the cookies.
Cookie settingsACCEPT Read More
Manage consent